Please try reload this page or logout
Skip to Content

Stock assessment softwares are complex and advanced technical skills are required to develop the models. Producing output becomes time-intensive and even more complex as thousands of simulations must be run on supercomputers in order to include the multiple sources of uncertainty in assessment results. As few stock assessment participants have the specific technical skills required to reproduce these outputs, IRD, IFREMER, the IOTC and FAO have partnered with the H2020 BlueBRIDGE project to develop a simple online tool in the form of a Virtual Research Environment (VRE) to facilitate the use of SS3 to users with varying levels of expertise.

The VRE enables any user to easily parameterize, execute and edit online various steps of the stock assessment work flow. It transforms the outputs of the models into a standard NetCDF data format, embeds metadata about the model run in the data file, and stores these data on the VRE infrastructure. The metadata for each run can then be searched on metadata catalogs hosted by the VRE, thus enabling traceability and reproducibility of past assessments.

The VRE also provides several collaborative web services, including: (i) a workspace to share documents, codes or data, (ii) an RStudio server to process data online, (iii) R Shiny applications to quickly and easily visualize the output of model runs, and (iv) Sharelatex to provide a platform for an automated reporting service to dynamically generate documents to package the results. 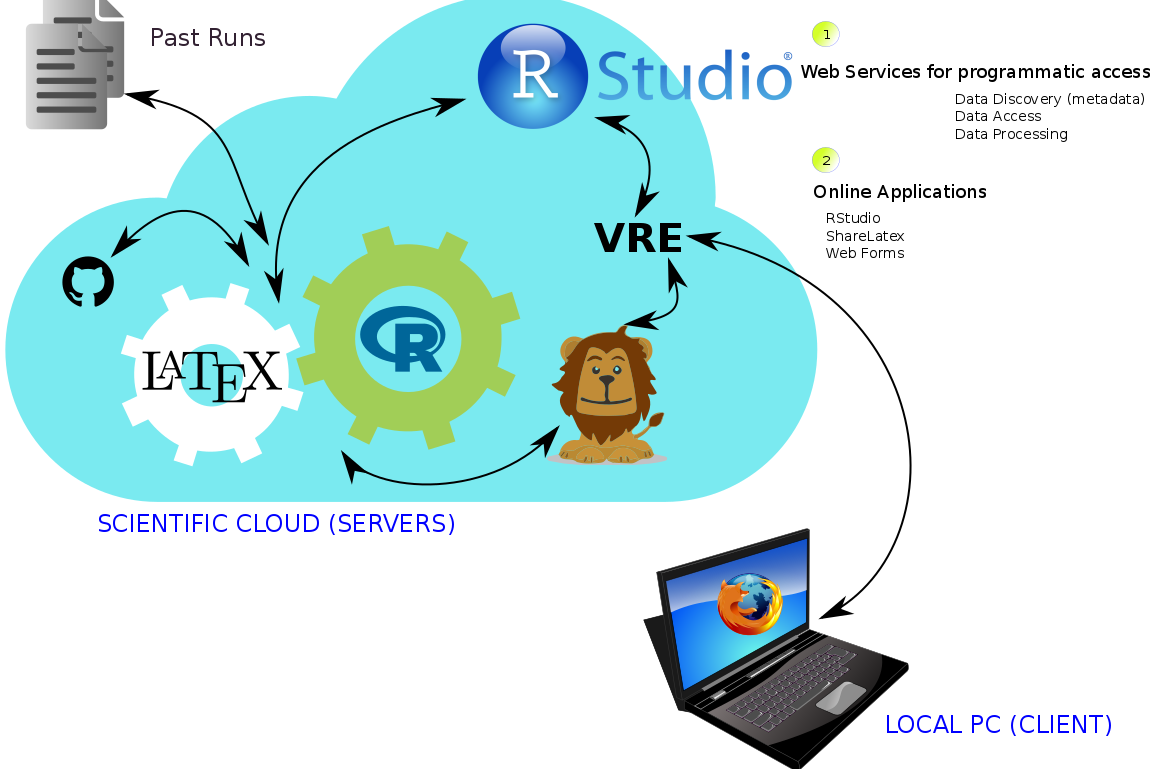 Table 1: The species models that are currently available on the VRE.

Several different types of stock assessment models are used to provide scientific advice to managers about exploited populations. Stock Synthesis 3 (SS3) is a statistical catch-at-age model that is used widely (Methot and Wetzel, 2013), including assessments for several stocks under the management of the Indian Ocean Tuna Commission (IOTC). SS3 is flexible in terms of data inputs and complexity, making it possible to run with data-poor stocks. It can use a diverse array of fishery and survey data, including both age and size structure of the population.

SS3 is based on ADMB C++ software that maximizes the goodness-of-fit of a set of parameter values, and then calculates the variance of these parameters using inverse Hessian and MCMC methods. This software is complex and advanced technical skills are required to develop the models. The production of outputs can be time-intensive and complex when thousands of simulations are needed to include the multiple sources of uncertainty in the assessment results. Interactions with the results also necessitate skilled language programming.

As few stock assessment participants have the specific technical skills required to reproduce these outputs, we developed this VRE to facilitate the parameterization, parallelization, and execution of various steps and the visualization of the results of SS3 to users with varying levels of expertise.

A collaborative environment such as the VRE uses simple tools to enable the storage and access of the data and source codes necessary to replicate past results or to try new parameterizations of the model. Increasing access to this complex model will bring more transparency and collaboration within working groups by providing “non-modelers” with a possibility to test hypotheses for the stock assessment. This will also increase the number of users of various levels of expertise: from experts, to managers, to even wider audiences with the potential applications of these tools to serious games.  Technical performance, document production, and harmonization of content will also be enhanced.

Target users are scientists / experts, NGOs, managers, and policy makers involved with stock assessment. Currently, SS3 is available to researchers with an NOAA VLab account. We have confirmed that it is acceptable to the developers and maintainers of SS3 that we make the software available to users in the format of the VRE. All users would require an account to access the VRE. The registration to the SS3 VRE is open to anybody but moderated by the VRE manager. Click on "Request Access".

We tested the run times of several stock assessment models, provided by the IOTC and their consultants, including SWO, BET, and YFT. On the Bluebridge infrastructure Rstudio online, these models take between 1.5-20 minutes. Based on these run times, we identified various scenarios of use, and calculated the CPU resources they require (Table 1).

We tested the feasibility of reproducing past IOTC SS3 stock assessment models of tropical tunas and billfish on the BlueBridge infrastructure. We repackage the SS3 codes so that they can be parametrized, executed and edited online from a simple web page, with standardized data outputs. 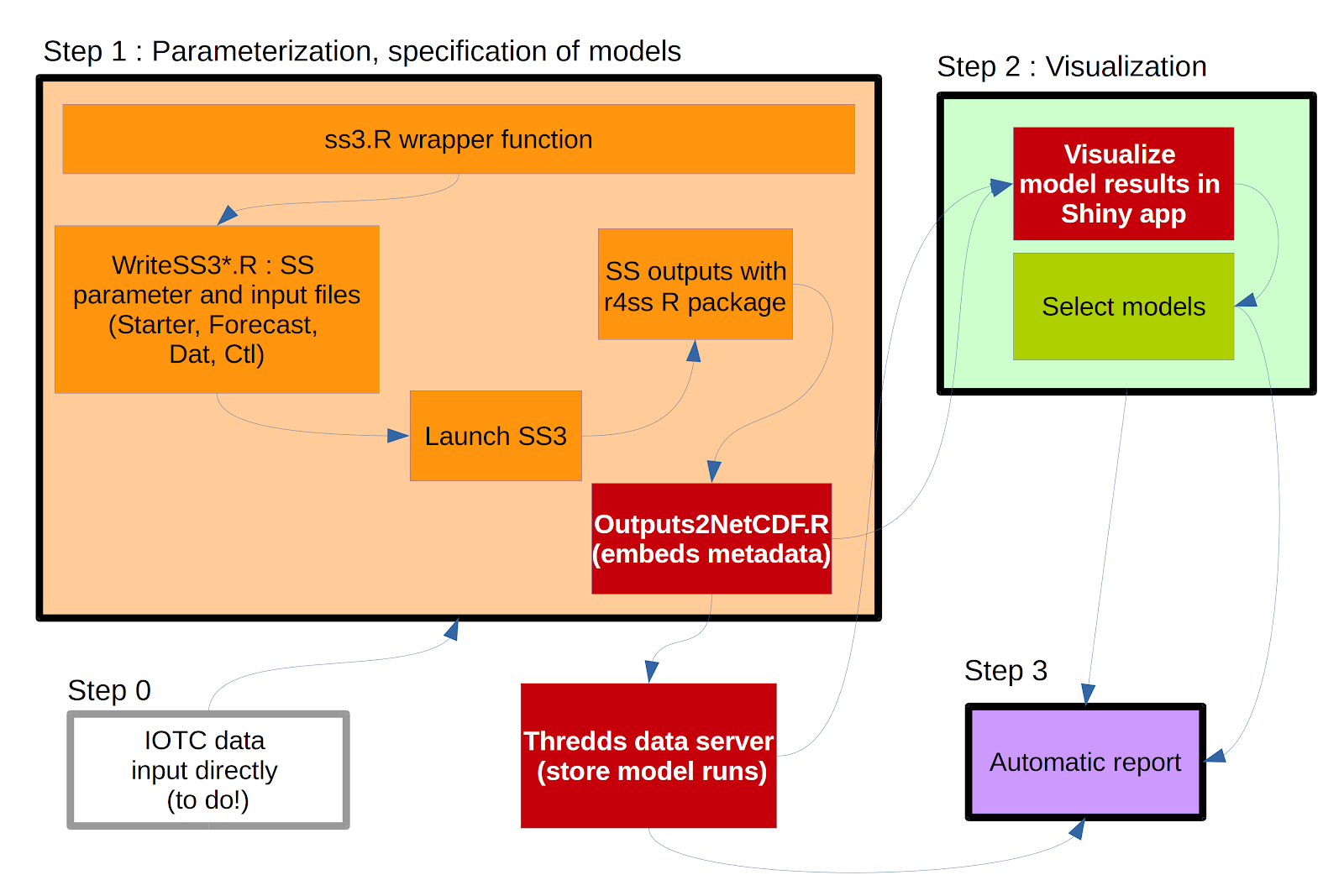 By doing so, the workflow will be managed in different steps:

We encourage suggestions from users on the parameters that are tested and changed most frequently during model selection, and the specific outputs that the user would like to visualize to investigate the model.

The IOTC_SS3 VRE  has been made possible by  funding  from  the  European  Union’s  Horizon  2020  research and innovation program under the BlueBRIDGE project (Grant agreement No 675680).

Access the  IOTC SS3 VRE with your BlueBRIDGE Gateway credentials.